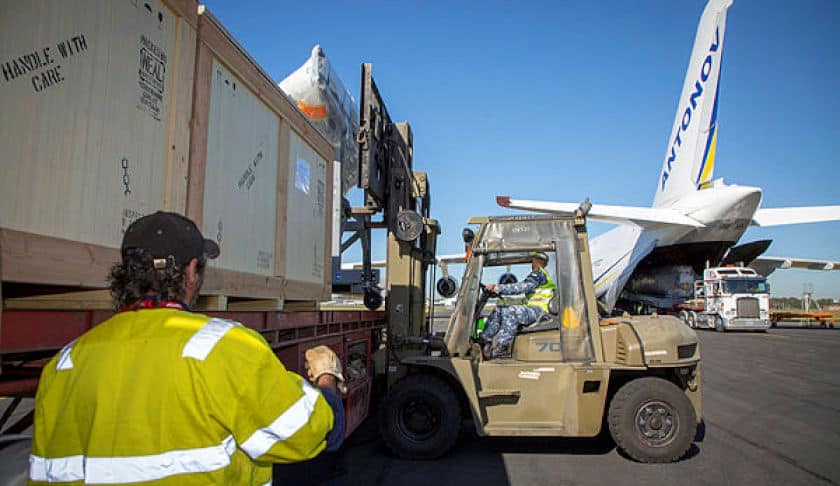 Support equipment critical to successful F-35A Joint Strike Fighter (JSF) operations in Australia has started appearing at RAAF Base Williamtown as the countdown to the arrival of Australia’s first two aircraft gains pace.

The first of eight scheduled sea freight drops of fully deployable JSF support equipment was delivered on 14 May and by 2 July about 390 articles had arrived.

Transporting the equipment to Australia is a truly international effort involving members across the US F-35 enterprise, including the F-35 Joint Program Office, US Navy and prime contractors Lockheed Martin and Pratt & Whitney.

To enable the equipment to be shipped to Australia, they are being supported by other US contractors and international freight forwarders, along with members of the JSF Division, Air Combat Transition Office, Supply Chain Branch and the Australian embassy in Washington, DC.

F-35 program manager Andy Doyle, describes the support equipment being delivered to RAAF Base Williamtown as a key enabler to RAAF F-35 operations.

“Among the first F-35 support equipment items to be delivered to Williamtown were engine lift trailers, manufactured by Melbourne-based company Marand, Australia’s largest supplier of components and equipment to the F-35 program,” he said.

Marand, a Melbourne-based precision engineering firm, has extensive integration with the global F-35 supply chain and recently announced the successful delivery of the 50th vertical tail for F-35 aircraft in partnership with Lockheed Martin and other key program contractors, including BAE Systems.

Support equipment maintenance is among the several hundred long-term, high-technology industry roles to be established in Australia over forthcoming years to sustain the F-35.

“F-35 original equipment manufacturer Lockheed Martin is establishing an Asia-Pacific repair network for F-35 support equipment, including Marand, Westrac, HI Fraser and Survitec, as part of the commitment to developing Australian SMEs and ensuring responsive sustainment of the F-35 for the RAAF and other F-35 operators in the Asia-Pacific,” Doyle continued.

“Lockheed Martin is also establishing a field services team at RAAF Base Williamtown during 2018 that will comprise approximately 80 staff, including aircraft maintenance, logistics and information system support services and training services sub-contractor Milskil,” he said.

Lockheed Martin’s local training partner, Milskil, has been working with local and international partners to prepare for the arrival of F-35 later this year and initial operating capability (IOC) in 2019.

As part of the F-35 Lightning II JSF Integrated Training Centre (ITC) at RAAF Williamtown, Milskil provides key training solutions, including the Aircraft Systems Maintenance Trainers (ASMTs) currently being installed, which will allow students to immerse themselves in all core maintenance tasks on the F-35. This training technology enables more robust, immersive maintenance training to occur without tying up aircraft to do it.

As part of supporting Milskil in delivering the training, the Lockheed Martin global mobile training team (GMTT) is likely to arrive in Australia in August to provide specialised training to the RAAF and Milskil. The GMTT provides worldwide on-demand site stand-up and sustainment support training for F-35 training centres and operational sites.

Australia is spending about $17 billion to buy 72 fighters of the F-35A variant, with the aircraft due to reach IOC by December 2020. Australia’s first six F-35As are currently operating at the international Pilot Training Centre at Luke Air Force Base in Arizona, with four more aircraft expected to be delivered by the end of this year.

Two of Australia’s F-35A aircraft are scheduled to arrive for permanent basing at RAAF Base Williamtown near Newcastle in December this year.